He was almost there, and the little rabbit’s heart was pounding. She could see the dog’s head poking in her burrow. Then he started digging again, soon she was being picked up by a black and white dog. Then she saw a massive digger coming towards her burrow.

The dog was running so fast now that she could hardly see anything then he started slowing down but she could see something on her leg. She looked down and realised that the dog had drawn blood. Suddenly she felt like she was going to faint, she was losing too much blood. She fell asleep.

The dog finally reached his destination and lay the rabbit down by a bigger burrow that he had dug just for her because the digger was digging up her old one. As the dog lay her down on the ground, he realised that she was not conscious. The dog didn’t mean to kill her. Finally she started breathing again and the dog was so relieved when she woke up and she realised  that the the dog had saved her.

2 or 3 weeks ago I did a Highland dancing competition. I did the jig and the fling I did not wont to do the jig at first but my friends talked me into it.  I was so proud of my fling and what made me more proud of  it was that I got highly  commend it was so cool.  I got a purple ribbon but i didn’t get anything for my jig.

The boy was only 3 years old and he saw the cows eating the green long stalks of grass. He thought it looked so yummy and was wondering what it tasted like, so he ran down the hill to the lush grass paddock to see the cows. Then he bent down next to his pet cow Dazie that was munching on the  grass next to him. Now he was really hungry so he got on his hands and knees and took a big bite out of the grass. He thought it tasted quite good then he suddenly felt really ill.

Last week the yr 7 and yr 8’s went to tech so it was Just the yr 6’s left in room one and this is what we did.

Monday:  On Monday we started our narrative (story) it had to be based on a short film called Catch it.   It was lots of fun then we played ukulele it was so much fun.

Tuesday:   On Tuesday we carried on with our story’s,  then  we made scones they were so yummy!   Mrs Campbell and the teacher from room 2 swapped so that Mrs Campbell could teach room 2 ukulele.  The room 2 teacher taught us gymnastics.

Wednesday:  On Wednesday we made codes for each other and mine worked and we played some more ukulele.

Thursday:  On Thursday we did a science experiment, it was a lava lamp and it showed us that water is heavier then oil,  because the oil floated to the top.  Then we used a coding website called scratch it was quite hard.  We swapped teachers again and did gymnastics for the afternoon.

Bob was always the first meerkat to get up. So one day he got up and saw that the fruit ball was ready to be played with. “Yay.” Bob said. He was so excited that they could play rugby again that he accidentally woke up all of the others. They got up and saw it too! They screamed.

It was a hot day in the middle of Africa and it was a good day for a rugby game but before the game started  they had this tradition where they hug the fruit ball before they start, it gives them good luck.

A wombat had flown in on a helicopter from Australia to be the commentator. Then the game had started, there was only one Vulture on the other team. The meerkats thought that they were ready but when they looked around the fruit was not there, then they saw the fruit ball in the vultures sharp claws. The  Vulture was off. The meerkats ran faster than they had ever ran before.

Then the vulture went high into the sky. The meerkats leapt onto the vultures back. They finally got the ball, Bob got it first, then he passed to Lolo, then to John and back to Bob. “Great catching by the meerkats” the commentator said.

Then the vulture got the fruit ball again and was getting away!  The vulture was not looking where he was going and BAM,  he flew into the side of the cliff and he dropped the ball.  Bob was ready to catch it, he caught it and was heading towards the rugby post. He got ready to kick it and he did, really hard. So hard that when it hit the ground it smashed and they would have to wait until next year to play rugby again.

We started on a dusty path. When I got down the path the dust went everywhere. We had to wear togs and thermals And on top we had to have wet-suits on. It felt like it was cutting off my blood circulation. We also had to wear helmets I got an extra small one. We had to wear life jackets so we did not drown. Then when we got to the bottom there were lots of rocks, we walked across them and looked at some shark eggs. They looked so fragile. Some people called them mermaid purses. Then we walked across the beach some more then we went into the water. I cut my hand on some barnacles it hurt. Then I watched everybody jump of a big rock . I liked the taste of the sea water yum. Then we swam back to sore and went back to camp, all wet and cold.

Flossie my puppy is getting much bigger now she is still so cute and playful. At night she sleeps on my bed and always around 2:00 pm she goes under my sheets and I wake up to her eating my feet. She is not toilet trained yet but she is getting there. When we eat dinner she tries to jump up on the char and eat it all. All the time around 7:00 she runs around the lounge crazy and it is hard to cram her down but when she is sleepy she licks my hand and falls a sleep on my lap  I think she is the best miniature fox terrier puppy in the world. 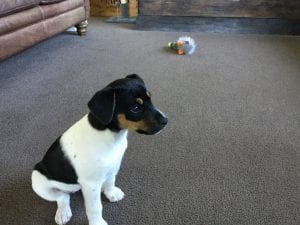 This term we have done lots we have learnt lots about electricity because it is our topic this term.  first we learnt how electricity  is made.  Then we learnt how it gets into our homes and about cables and how to light up light blobs.  Then we learnt about how our body gets energy we have also done some art work we made name aliens and zen tangle art and we also made dodecahedrons they are  shapes and we had to put them tougher and then painted them.  This term I am very proud of my maths because I know most of my times table.  Youthtown also  came an done some games with us in the morning, we also had  hockey skills and that was fun too.  So we had a really good term.

I have two heroes, one is my dad.  Dad is my hero because he is kind and works really hard so I can have a good life.  My dad is also really tuff when he gets hurt he doesn’t cry or even notice it.  My other hero is my mum.  She makes me feel better when I am sad and gets rid of all my worries.  My mum also works really hard too.  She feeds all the calves.  So those are my two heroes.

On Friday It  was my birthday I turned 11. After school my three really good friends came to my house and we had cake and then had a fashion show with all my new clothes. Then we went into the hot tub for an hour. Then we got out and played with the puppy and had diner it was nachos. Then it was time fore everyone to go home and my birthday was over.